Some axioms of Microeconomics concern the rational consumer. Consumer preferences are complete. A consumer, when faced with bundle A and bundle B, is able to rank: A>B or A=B or A<B. This implies consumer preferences are transitive: if A>B>C, then A>C. In applying the axiom of completeness we can expose its absurdity.

Imagine a perfectly rational consumer passing a garage sale. In the garage are 20 goods. We can produce the set where “S1” is the set of all goods in the sale:

Every bundle of goods is within his budget set, that is, he could afford to buy any bundle. The rational consumer must choose whether to buy each good and unless he purchases all goods, he must pass over some goods and choose not to purchase them. He makes the binary choice for each good whether or not to purchase that particular good. The set of all possible bundles of goods (S2) is the set of all subsets of S1 and is as follows:

If our axioms are sound, we must conclude that the consumer is able to instantaneously rank each of the 1,048,576 bundles according to his preferences (completeness). The consumer must be able to state the rank of bundles {x1,x5,x7,x19} and {x6,x5,x18,x20} for example. Much of our decision making is unconscious and impulsive, not rational. These axioms are wildly unrealistic and do not hold logically or empirically.

This “economic man” is not a man at all! Many have dismissed this man-machine and he is not a feature of economics itself. The debate over rational self interest is as old as the idea. Utilitarian philosophers and economists as early as Helvetius saw man’s rational self interest as the prime or single motivation of action. In response to Helvetius, Anne Turgot, the 18th Century French economist, wrote that belief in man as solely actuated by self interest is “a metaphysical abstraction” that “amounted to no more than saying ‘man desires what he desires.'” The debate persists. The Marxian, Post-Keynesian, Austrian, Behavioural, and Neoclassical schools are sometimes opposed and sometimes harmonious on this subject though, the disagreement over the rational nature of man is most acutely pronounced in the relatively new school of Behavioural Economics and Behavioural Finance (see: Kahneman and Tversky). Importantly, the axioms above are a feature of the orthodox “Neoclassical” school and its accretions. These axioms are not a feature of “economics” in and of itself. 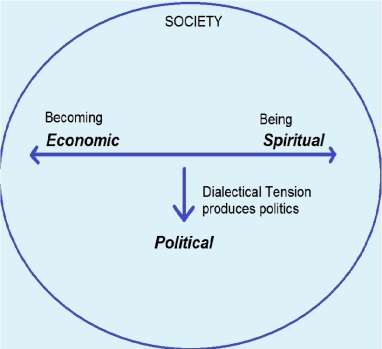 Economics is the study of economy. Economy is as nature is: a process of change. The allocation and distribution of resources, production and so on are in continual flux and the market is in a state of continual dynamic disequilibrium. Society and class are greater than the sum of their parts.  As P.W. Anderson wrote in his article “More is Different”: “The reductionist hypothesis does not by any means imply a constructionist one.” It is not possible to begin with man and aggregate into society since societies and economies are systems greater than the sum of their parts. These systems are actuated by the Economic and the Spiritual. Economic forces rise from all things material and the Spiritual forces rise from all things immaterial. The Economic is the study of living and becoming. The Spiritual is the study of the undying and being. The Spiritual and Economic within the model are in conflict within society, but also within ourselves. The synthesis of this conflict is Politics, where politics is meant as the use of Economy to achieve a Spiritual end. For example: wealth distribution to achieve fairness. This end to Economy has for many years been supposed to reside from within economics itself: equilibrium.

Many Neoclassicals and Austrians believe that the market is either in equilibrium or moving towards equilibrium. Equilibrium analysis was a useful tool in the 19th Century, however, by the admission of Walras and Marshall themselves, it was only ever that. Equilibrium was the end to economy and the ideal allocation of resources, justified from within economics.

Rather than a static supply & demand curve, the shape of the market is closer to a Rossler or Lorenz attractor. We find that the market swings about the points of equilibrium (there may be two or three) and either never reaches equilibrium, or is in equilibrium for agonisingly brief moments (the Great Moderation or the “permanently high plateau“). If static equilibria are incorrect representations of Economy then what is the “being” that economy strives toward? What is the end of economy? Without equilibrium we can only argue that there is always short term disequilibrium, no end, and only broad “stability” in the chaotic higher structure of long term cycles.

Since economy is simply  a process of change, tending towards no fixed goal, there can be no ideal or justifiable allocation or distribution of resources that can be justified by economy itself. All “ought” statements must arise from without as economic spooks that seek to guide economy towards some end. When this occurs, economics become politics. Indeed, many economists today speak of little else. They will assert that growth is an economic good, employment is a economic good, productivity is an economic good, wealth equality is a moral and economic good (or evil). All of these statements are political as they seek to use economy as a means to achieve some ethical end, or some end imposed from outside economy itself. The desire to “free” the market totally with the view that this is a moral good, is as political as the desire to suppress the market in order to preserve the established order. Other economic spooks include: “fairness,” “justice,” and “stability,” and always produce politics. The study of Political Economy is often politics and not economics. While some political economists step outside of morality, any application of economics in policy or manifesto is politics and not economics.

Economics is the study of economy — of becoming. The economist overcomes the dualism of politics and centres himself, observing the world with keen eyes in his position as spectator in the drama of nature.